From deciding I wanted to go to sitting back any my PC ready to watch F1 Singapore Grand Prix highlights, it took 1 hour 10 minutes. Was served at 9:33pm on a Tuesday. Felt quite comfortable. Even mundane – like it should be.

Went at around 9pm and it was fairly empty. One checkout was closing as I got to the end. I know the route there and back and the locations for most of the stuff I buy. Smooth sailing!

Today I collected the 3-in-1 double duvet with 2 pillows from Argos which I had reserved yesterday afternoon.

Was figuring out how to get there and back. Walking was an almost straight route West but half an hour carrying an awkward load sounded like quite a mission. Then I noticed the Tube lines running just North of my flat, which would cut it down to a short walk at either end.

As it turned out the Circle line wasn’t running and Great Portland Street station was closed. It had signs to Regent’s Park station, from which I could see the Bakerloo line would stop and my target: Edgeware Road station.

So that’s the route I took and there was much rejoicing. It only started raining once I exited Regent’s Park station on the way back. After walking a couple of minutes from my flat I had a hunch it would rain. Maybe I should listen to that little voice more often? Hard to tell it apart from all the others, though!

Today I unpacked it all and found only one pillow inside! Bit lame but not bothered enough to find out how to complain and go through whatever process is necessary to get the other one it was supposed to have. Although now I’ve just written that, a slight tinge from my conscience means that perhaps I am?

Anyway, I had a lovely night’s sleep with just the 10.5 Tog and the pillow was lurvely. Was quite reluctant to get out of bed once the morning arrived!

We all met up this Sunday for a quiet day together. Mum and Dad picked me up on the preceeding Saturday afternoon. Dad and I cycled in the evening and discussed life at length. Sunday lunch was a belly pork, one of my all-time favourites. Watched the MotoGP and commuted back by myself.

Took like 2½ hours for parents to get here due to traffic jams on motorways. They brought the big computer chair from home, at my request, which I am enjoying as I type this. Armrests make a big difference for comfort at a PC.

Dad and I haven’t talked as much as we could do. But I think we’ve done it enough. Mum has a new generation of Guinea Pigs, over a dozen babies since I left home! We talked a bit about recent events which was nice.

There’s a lot more sky and greenery in Hampshire than London. Was a fine reminder to venture out into it again.

Most of my food in Hampshire came from the Tesco in Aldershot. Now I’m London I’ve been sourcing new locations to buy it, often thanks to the referrals of friends and colleagues.

Received our BT Hub 2.0 today. The packaging is good, the manuals are great, the installer is a paradigm of domestic simplicity and even that ‘new electronics’ smell has been done well. Also, the Hub just looks cool, a cable cover and mellow lights. So far so good! From standing start to finishing the basics took precisely 1 hour.

After plugging everything in, the Hub took just about 7 minutes to stabilise. It goes back to ‘flashing orange’ from time to time. The manual explains this is while BT test the most balance of speed and stability.

Takes a little while to start, seemingly in order to play an animated BT logo. But it does have the most modest splash screen whilst this happens. And there are useful, reassuring animations later on in the process. Of course, it’s not at all standard Windows UI but it has been done well: 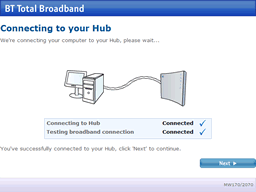 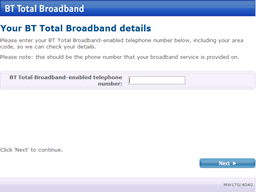 Only awkward part I found was this label, which wraps to a new line when there’s oodles of space on the far side: 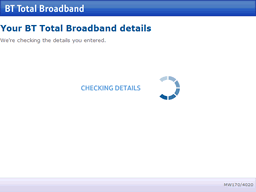 The search engine so many installers try to add these days was present and ticked by default, as expected. But you can click anywhere on the label to untick them. A few installers I’ve used (deliberately?) make the text non-clickable, so you might not realise the boxes are still ticked when you inevitably (and hurriedly) try to opt out.

The final stage had the CD running at top speed while the progressbar slowly went along. Some parts of the animation were customised to our actual details. The final stages seemed to finish rapidly but the progress bar didn’t look completely full. Here’s a screenshot of that, caught in a transition effect between two promotions): 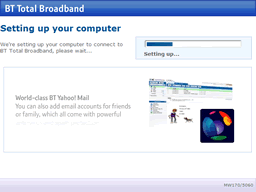 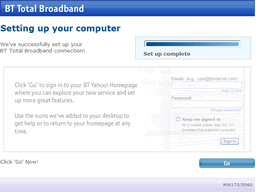 Time was now 38 minutes since starting, although I’ve been doing it at a very leisurely pace and writing this. Clicking Go made the CD spin up again, seemingly just to grab some code to close the window. But then Firefox opened at this page: 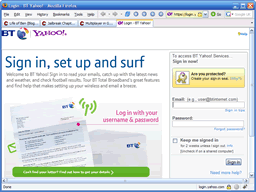 Harmless enough. Bookmarked it just in case then went to GTA Media Press Forums to hang out with my gaming friends. Game Hunter works, everything works. Dropped connection once, as to be expected. Restored it within a couple of minutes.

Will update this entry or make more if interesting things happen. First 10 days are supposed to have more speed and reliability checks, so I’ll use it as normal until then. The guides say restarting it in the morning about 3 times during these 10 days can help them, so I’ll do that as well. Probably start with tomorrow morning, then Saturday morning.

Sektor’s Network Help is the place to start, recently re-written after I suggested many improvements. The specific forwarding ports for GTA2 it links to via don’t seem to cover BT Home Hub 2.0, although 1.5 is there. So here’s a screenshot of how it looks, once filled in: 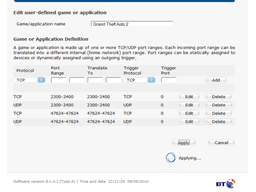 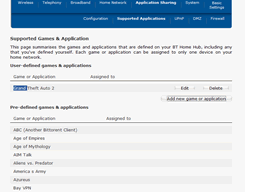 I used a couple of similar-looking BT products from that list and improvised. Can join games but not host at the moment. There are a few other bits to try but it’s nearly midnight, so will settle for getting a couple of games done.

Sektor helped troubleshoot for a while but no joy yet. Will set up local static IP Address at weekend, as a few social things between then and now. (Happily!)

I used the router admin to set a static local IP address for this machine. Then assigned the GTA2 port forwarding rules specifically to this machine. Here’s the screen where I did it, with some sensitive details hidden: 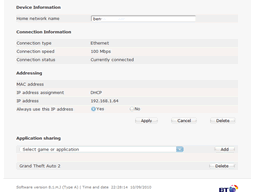 Played a couple of 5-player games on DeCon Labs, then a big fragfest on Tiny Tiny Town Arena. Was totally smooth, even in the most chaotic circumstances.

Required quite a bit of technical knowledge, patience and careful experimentation to get GTA2 working. The same was true with a Virgin Media modem and a separate Belkin router. A lot less polished UI but a more well-known and searchable path to success, in that setup.

First few days of BT Total Broadband have been positive, for me.

I was getting an average of nearly 300kbps while downloading a half-gigabyte file for about an hour. That’s about 2.4Mbps stable download speed.

For computer games I’m seeing pings of less than 100ms to my European friends. It’s great for playing GTA2 online, really stable too!

Attended a private viewing at the Timothy Taylor Gallery. There was a collection called In Dreams with a side room for an American political artist.

Decided against mingling. The atmosphere was fairly relaxed but also quite insular. Two glasses of champagne had put me at ease but not quite enough to try ice-breaking.

Interesting variety of styles. One intricate painting looked genuinely 3D…guess it was the composition and maybe some finésse along the edges of each shape?

The political work was a rather simple style with rather simple messages. In a way that made them all the more subversive. It made their strong perspective on power and its repeated corruption seem normal and obvious. Well-researched pieces documented old (and therefore declassified) 20thCentury CIA operations. Counter-intelligence, côup dé gras, foreign interventions…and so on. Covered a few modern events as well, predictably dominated by Iraq and the wider Middle East.