In the evening I went out, riding various tracks on the summit and surroundings of Beacon Hill. Was out from 6:30pm to about 8:40pm! Saw lots of slopes, tracks and erosion patterns which I could use in the desert location for Jailbreak. Also saw several hot air balloons.

Played around the dry ditch near Basingborne Park, then rode past The Verne and all the way along Sandy Lane. Turned right at the roundabout for the long approach to Beacon Hill and took the first major fire track on the left.

Noticed a lot of smoke ahead, so turned right through woodland. Ended up on a parallel track, which I had exited the woodland from last time.

Lots of fun tracks and a cool but very difficult parabola-shaped erosion channel on the side of a sandy hillock.

Took some long, fast downhills and got quite chilled. Had gone out in just some shorts and trainers in order to catch some Sun. Felt thoroughly exercised with no aches or pains…plus quite a considerable appetite!

Made a lot of short notes while I rode. Decided not to add them here because every one of them could do with being expanded on. Would take ages.

Had driven to pick up my sister, had Father’s Day, then took her back before going out for this ride.

A couple of somewhat left-field analogies whilst my midn was wandering on my week-long Summer holiday.

Contrasting each of those points with URLs:

A block of flats somewhat fits the URL model, from the perspective of the building’s owner. Here’s the breakdown for the way URL segments correspond to addresses within a block of flats:

It’s well worth getting these right. They are literally the location of that resource on the web.

A Jenga tower is a stack of blocks used in the game, Jenga. Players take turns removing blocks from lower levels and placing them on higher levels until the tower topples.

Toppling is equivalent to inaccessibility. The unfair distribution of weight is equivalent to a layer of the technology stack having to do more than is fair or viable. Such as requiring individual web authors to add text sizing widgets to each and every page of every website they create. Or requiring assistive technologies to develop a sci-fi level of AI to heuristically deduce the semantics of pages using presentational markup.

We can see what the balance should be. Making that happen is the next and ongoing challenge.

Got chased by a small but very noisy dog through Basingborne Park. Gentle ride to the tracks out past Pondtail, made very smooth by oiling all moving parts. Removed rear mudguard as it got broken during a crash last time. Was a glorious evening. 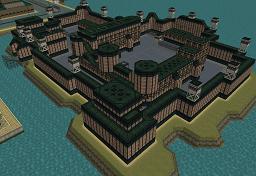 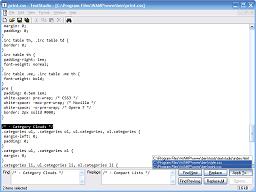 Making my shabby, homebrew HTML editor work right is a pet project. Especially as I’m a bit of a keyboard junkie. The changes have improved nearly every aspect. I’l release them when they are “good and ready”.

The event architecture and centralising code are the main changes. I can now use Ctrl+Tab to switch between files while the Find/Replace Panel has focus. Shift+Alt+S to Save All now works in both those contexts as well. (The VB6 Menu Editor doesn’t support complex shortcuts, so I use the central keyboard handler for them.)

The architecture maintains state and tracks focus in a different way than before. There are a few bugs and regressions to iron out, such as a few keyboard shortcuts fire twice. A few of convenience features have to be re-implemented, such as copying the selected text to the Find box when focus is moved to it via Ctrl+F.

One of the interesting (well, interesting to me) aspects of this was documenting all of they keyboard shortcuts the application actually had. As these may change, I’ve decided to capture the whole lot as they stand this week.

Menu accelerators are not included since there’s a big Format menu with various submenus for producing HTML.

Took about 40 minutes from leaving the house to getting back. About 20 minutes before that to check remaining food, write the new list, get wallet, some spare carrier bags and so on. (So 1 hour to buy 2 weeks of supplies.)

While finding the shortest checkout queue, I noticed one which was half-full. Went to it and noticed the woman still had a third of her shopping left to put on the conveyor. Still, this was the shortest one within pouncing distance so I queued behind her.

She noticed I had just a handful of items and offered to let me go in front. After a solid second of surprise, her genourosity dawned on me and I took the place, thanking her duely.

After stumbling through my shopping and paying, I took the bag and trundled off. About halfway towards the door, someone scampered up to my shoulder and told me I’d left my shopping. It was the woman and after my initial bemusement, realised that the bag she carried was indeed my bag of cake bars.

I again thanked her and quickly felt there should be some way I could repay her attentiveness. But we had automatically parted ways, back towards the different stages of the errand we were each running.

While driving to the supermarked I had given way to lots of traffic. Many cars were parked on the roads, I guess many people were visiting each other for parties and family stuff. Made me think about Karma, which I disbelief at a spiritual level. Might people subliminally sense when another has done good deeds, then feel more inclined towards help?

Or perhaps she was just a really good person. Perhaps I should have made more of the situation?