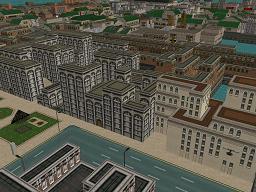 I’ve just been flying around Capital City. It’s listed near the end of the GTAMP !maps list. An oldie but a real goodie, with superb detail throughout the entire square kilometer of terrain. Lantyz and Heri can also match this quality, now I think about it, but in much smaller levels.

Big levels usually play quite badly in multiplayer. Especially with so many areas that are tucked away. For single player, it’s an absolute masterclass of map-making ability. I’m blown away. It’s amazing. Totally on a par with the original levels. 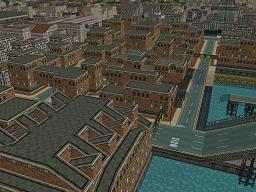 After about a year of anticipation, there is a public release of his OpenGL map editor! The greatest features are:

The screenshots in this entry were taken using his editor. Even if it stays as a screenshot tool, it’s epic eye-candy to finally see the original and custom levels this way!

At about 7am, dad drove mum and I to the hospital where the surgey was to take place. All went very well. NHS Hospitals are:

I even got an egg sandwich at the end.

During the past couple of days, my nose has started running and I’ve started getting mild headaches. Maybe my throat was vulnerable after the operation, as the nurse said to expect a sore throat.

My mouth is feeling a bit tight and tender on the right but the left almost feels normal.

Had some very visible swelling but even that has started to go down. Recovery seems to be going faster than my single wisdom tooth extraction, which took about 3 weeks in total.

Considering how much more work had to be done, I’m impressed!

Our team at work went to a nearby Waggamamas restaurant for Friday Team Lunch. After some deliberation I ordered the Cumin Chicken Salad and absolutely adored it! This is now one of my all-time favourite meals to have.

I’ve gone back several times during the subsequent few months, ordering this each time and loving it each time. They also do an outstanding hot chocoloate. The green tea is often lukewarm and sometimes very weak. The orange juice is expensive but large and tasty.

We all headed off to The Hatchgate Inn. I had the massive battered fish with salad and chips, which is usually way too much for me. This time I ate nearly the whole lot…and it was absolutely delicious!