Just got back from seeing Fliss again. We completed Baldur’s Gate; the last battle was really tense.

She really liked the card I got for her. But the present, Worms (Private Pack), wouldn’t run on her laptop.

Hardware being incompatible with software seems a bit 1970’s to me. I thought it was a solved problem. It runs Windows XP fine, was way above the minimum spec and was above the recommended spec. They have a Technical Support number...an 0845 one, naturally. Very dissapointing.

But at least the card worked and we had a fun time together.

If you want to test the upcoming revisions to CFG Studio 2, ask in the GTAF topic.

Picolini has the new version already. You may get it from him if he knows you. Add a message to the topic saying you are testing it, with any good and bad points you notice.

GForce messaged me earlier today about helping out with MISA. He’s taken two months off work partly to do this. Seems like the project wants to be more professional in the way it is run. Like planning district themes and getting the municipal buildings in before anything else.

It’s an attractive prospect. Updating CFG Studio 2 to support commenting would be a useful way to help, as well as a difficult programming challenge to attack.

However, there’s a lot of attractive things in my life. Designing and programming TextStudio’s new features is quite a fun exercise. The Find/Replace Panel is something I’ll find useful every day.

But relaxing away from the PC is becoming more appealing to me. Especially when it’s with Fliss.

Not sure what I’ll do.

Myself, my dad, my mum, my sister and her girlfriend all went out to dinner. Genuinely cheerful reunion.

My sister and her girlfriend are engaged, which is cool. So I’ll be gaining a half-sister-in-law.

My birthday is on June 27th. Need to figure out presents people could buy for me quickly.

Using the gorgeous Bentley Speed 8 GTP, I won this race in GT4. My total time was 5 hours, 2 minutes and 27 seconds.

My fastest lap was a 1:14.021 thanks to good slipstreams down the long main straight. I could consistently run in the 1:14 range; pretty good for Super Hard tyres. 58 litres of fuel per pit stop and about 20-25 minutes between pit stops worked out nicely.

Just noticed the search box is in the wrong place and the page has a horizontal scrollbar in IE6. Fixing it was pretty easy. Was some random bug with using float on <form> so I apply it to the <fieldset> now.

Then I noticed the list of footer links was invisible. They were in the correct position and the links affected the pointer as expected...but they were invisible. Turned out to be a hasLayout bug on the parent <div>. Obviously.

After an e-mail conversation with Picolini about CFG Studio and Vista, we eventually found that CFG Studio 2 works in it fine.

The current beta of CFG Studio 2 actually seems more stable (and more functional) than the old version ever was. I’ve removed the old version from the site and I’ll clarify that my work on version 2 stopped when I left GTA modding.

Fliss called me about noon on Saturday 2007-06-09. She was really bored having spent all week at a course with loads of people and was now back home with nothing to do.

I arrived about 13:30 and went straight upstairs. Fliss had music playing so we relaxed and chatted at length about Fliss’s course, how work was stacking up for me and more general stuff.

Watched a bit of the MotoGP. Played outside with Scrappy for a while.

Had fish and chips. We arrived at the shop about 15:00 but they are closed between 14:00 and 16:30. We returned home to get a towel, then went back and chatted on the grassy hill opposite the shop. The time passed quickly.

I bought the food once they opened. The fish was huge and there were loads of chips, even though we shared the portion between us. Very greasy but very tasty!

When we got back we played computer games for a while. Started with Dead or Alive 2, accompanied by much cheering and cursing; then Juiced; then we switched to Baldur’s Gate. We played that for hours, with Fliss cooking lunch for us both while at a save point.

My first experience of playing an RPG. It was really fun playing through it cooperatively. It had enough depth to be immersing with enough action to be entertaining.

Both our birthdays are on June 27th. I’ve got two present ideas for Fliss. Should order them asap to make sure they’ll arrive in time. Will hopefully be visiting her again next week.

Dan Connolly started a please reivew mobileOK Basic Tests 1.0 thread on the HTMLWG mailing list on 2007-06-07. For a long time I’ve thought the work being done by the Mobile Web Initiative is nonsense.

There were already some detailed responses about technicalities in the mobileOK work. But the really important thing is that to pass mobileOK you must avoid HTML. So this is what I commented on...accidentally top-posting like a total n00b.

Here’s what I wrote, reformatted in HTML:

The draft is premised on a vision about mobile browsing that assumes special mobile content. Instead of implying a separate Mobile Web, I think the W3C should push for one World Wide Web with mobile browsers that can access general Web content.

The premise of mobileOK seems to be that you take the non-Web-ready thin browser and expect origin servers out there take special steps to accommodate it.

This is a fundamental criticism I have of the mobileOK guidelines. Mobile phone networks here in the UK have been promoting their “access the whole Web on your phone” capabilities for years. They can even do scripting (Raising the bar of mobile browsing).

Because so much web content is text/html, surely it is more useful to work on improving support for that in UAs? Mainstream mobile UAs already have better support for HTML than XHTML, many having no support at all for XHTML (Results of mobile tests). I can browse the text/html Web fine on my mobile phone in the here-and-now.

PDF and Word documents are also more common than XML formats on the web, in my experience. Improving support for them would surely be the next logical priority after HTML?

Advising against W3C technologies such as HTML and PNG seems like a strange move for a W3C Working Group to take. Especially since these technologies are already implemented widely.

Sorry if I have misunderstood the guidelines.

Every lump of hard-wrapped, monospaced, plain text on that list’s archive seems like a wonderful irony. It’s the HTML Working Group but we shalln’t use <a href>!

On the plus side, the mobileOK people have been responding. So maybe their MobileOK Basic Tests 1.0 will get a reality check, somewhat like WCAG 2.0 has undergone over the past year. 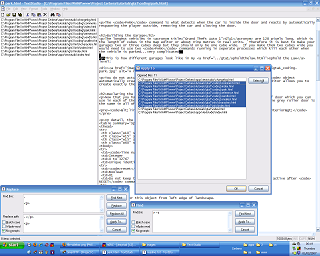 Firefox’s Find Bar has impressed me ever since I first used it. It is compact without being cluttered. Being a toolbar rather than a window, it does not obscure parts of the viewport:

It aims to combine the best bits from both approaches. Differences from the Find Bar:

Find as you type (FAYT) would be nice once I’ve done the main functionality. The actual find and replace code will probably be all new because the current code is a mess. Always quite exciting when I give myself a challenging (for me) programming task.

Texted Fliss on Thursday to see how she was. The bedsit she stays at had been raided by the police; luckily they weren’t interested in her room so it stayed intact. She’s now moving back to her mum’s.

I called her on Friday at 16:30 to see how she was. After chatting for quite a while, we arranged for me to go over there that evening and stay a day or two.

Woke up at 14:00. Had some breakfast and played tug with Scrappy and his rope. Watched some of the WTCC from Pau in France. Got dressed at 16:15; Fliss was playing more Final Fantasy XII.

We went to the park at about 19:45. We were on the swings and some young teenagers came up and started chatting with us. They had clearly been drinking but were tipsy rather than drunk, so it was actually quite funny. We left after a while and went back and Fliss cooked dinner: fish and vegetables.

Woke up about 13:30. Had breakfast while watching some MotoGP.

Started moving stuff from Fliss’s bedsit back to her mum’s house at about 16:00. It had been sunny all day and was really warm outside. We were sweating buckets but we were done by 18:00 having made a few trips. Bags of clothes are surprisingly heavy!

We went to the fish a chip shop at about 18:10 but it was closed. So we walked on to McDonald’s, each having a cheeseburger and large fries with Fliss also having a large banana milkshake. Worrying, it was actually quite tasty.

Before we knew it the time was 18:50. After walking most of the way back it was 19:03 so I ran the rest of the way to make sure my parents didn’t leave without me. Got there are 19:08 and they were still waiting for me. Found my cocktail sausages in the rear footwell; I had remembered to pack them but they fell out without me seeing.

Once Fliss got back we went in and I gathered by bags. Luckily I’d packed everything ready earlier that day so this didn’t take long. Was back home by about 19:30, showered, then ate the sausages with half a tin of baked beans and two slices of bread.

Something that always strikes me when I’m around Fliss is how different it feels than when I’m alone. I can’t quite describe it...it’s like my senses are heightened and my mind is soothed.