I can always get trains to spawn on any route I place in the tracks.dat file. GTA San Andreas also uses a tracks4.dat file but routes placed in that file arent’t spawning trains for me.

From brushing my shoulders to barely covering my ears, today was the second time I’ve had my hair cut in Aldershot. I went to the same place as before. The staff were friendly and it was a nice (if somewhat girly) experience.

Towards the start of this month I began making this site easier to maintain. It is currently a collection of over 200 static HTML files which means repeated things are included in every page:

Since I’m not ready to create a database driven system I’ve settled on using PHP’s include_once() and require_once() commands. Each file now looks like this:

In this way, each file only contains the unique parts. I’ve also revisiting the rather hurried information architecture of some areas.

You can preview my progress with the new system in the development area.

GForce released a test of the illRES island, including the train tracks JasonB sent to him as Max files a while ago. Slaloming through the legs of the oversea railway bridge in a stunt plane rules. I’m really glad I insisted we keep that long, straight section in the plans.

You can see screenshots in the MISA PPT.

From the Myriad Islands IRC Channel:

I’ve started writing up how to read most of the text data formats from the folling games using a single, generic process:

The formats are similar in principle to CSV format. One line is a record and each record is delimited into values.

LocO_G had volunteered to build the gold and green parts of the Myriad Islands Tunnels. Within a day or two he had a text tunnel roughly following the route and working in-game. He even made some rough AI paths for it!

It’s a really splendid feeling to see all the planning and negotiation finally leading to something which can be played on.

Overnight we had snow. I hadn’t noticed this even though I was working on stuff all night. By morning there was a layer just deep enough to get that squeaky crunchy noise when you walk over it. Lovely.

My mum noticed that two of our guinea pigs are actually pregnant. She thought they had looked a bit strange for a while but hadn’t been able to confirm they were carrying babies or not. Now they are in a cage by themselves for some relief from the father!

Downloaded VB2005 Express but it has failed to install every time I’ve tried at 80% of the “loading install components” screen.

Saw Doctor Munser at Branksomewood Healthcare Centre about hands. Recommended a specialised hand cream for moisterising and repairing to be used twice daily. Bought it at a nearby supermarket, apparently it’s “Concentrated for 200 applications.”

Seems to make my hands moister for a while, so fingers crossed (although not while applying it).

Saw my dentist for a filling. He anaesthetised the area with an injection which knocked out the whole left side of my mouth. Very off feeling! When I drank, I could feel it in the right half of my mouth but not the left.

He advised not to eat anything until it wore off since you can end up eating parts of your mouth and tongue without realising. He predicted it would wear off from about 13:00 and he was right: by 13:30 my mouth was all mine again.

Dad had the appointment right after mine but his was only for a checkup. Which went fine.

After some much appreciated motivation from various modders, the CFG Studio 2 beta has received an update and is available for download.

In little under a month since the previous beta, I made lots of progress. This rewrite was only started two months ago and already CFG Studio 2 is almost level with the old CFG Studio for editing handling.cfg files.

It’s already been switched to by a few handling makers who had previously been using the old version. There is some interest from map makers for the growing compatibility it has with other much-used formats, particularly *.ide and *.ipl.

The purpose of this rewrite is to exceed the old program in the capabilities it will give modders of the 3D GTA games. Little by little, it’s getting there. c{:¬)

A less impressive achievement is the skin ailment I’ve aquired on my hands. Flakey, tight skin which is starting to look stretched and wrinkled is really unpleasant. I had hoped it would subside, as you do, but looks like it’s set up residence.

Looks like a trip to my GP is going to be in order. Hopefully I can get an appointment during this week.

Recently produced for the MISA project: 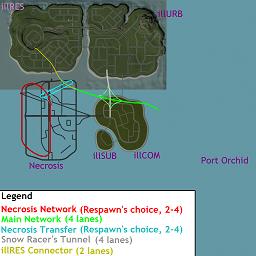 It was added to the tunnel topic yesterday.