Deathmatches Playlist: Tag teaming terror to take them to town! Or roll alone, owning as you go. 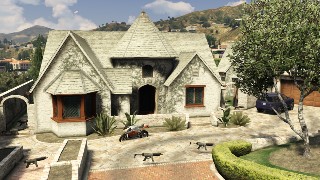 The guest of honour just arrived in the same dress your wife is wearing. And they have a newer Lampadati than yours! There’s only one way to settle this. Small, intense DM around a mansion like many others in Rockford Hills. 4 players creates 5 minutes of intense SMG gunfire at distances under 25 metres.

Forced+Pickups, locked to SMG. Testing: Larger location than my 4-player DM called Billionaire Brawl for 4. Will see how many this can handle by testing and refining. Cover is provided by construction props, all respawns are on a weapon and next to cover. Armour will help vulnerable areas and changing location.

Forced+Pickups, locked to SMG. The Grotti Owners Club has arrived. They are loud, dangerous and prone to fiery outbursts – just like their cars! You haven’t finished the display stands and it’s pouring with rain. The argument spirals out of control. 5 minutes, vehicles provide cover, 5m to 50m range.

An open deck littered with long range weapons. Sniper spots at either end. More action than the original Cargo deathmatch.

Funnily enough, this looks and plays a bit like MultiSlayer Ship for GTA2!

Large arena with cover, alternate routes and a couple of sweet roofs.

Not currently in the playlist because I haven’t added it yet.

Pump Shotgun battle between the pillars of a carpark. Do you know Kung Fu?

Not currently in the playlist as it’s only been tested a few times. Scouted some other locations which might fit 16 players.