Fiona was on Ladybird while I rode Secteur.

Sprinted to catch Fiona just 50m before completing my 3rd lap and she completed her 2nd lap.

Waved from long downhill as she started the long uphill. That was probably the sector with the biggest speed difference between us on the access road which loops around Finsbury Park.

After the race I raised Secteur’s saddle by 0.5cm. Oiled the chain idler wheels but still something squeaking at the rear.

(Looking back, the squeak was probably from my hiking shoes rubbing the cranks. The brake centering gradually drifts to one side so it might have been a slightly rubbing brake.)

Hub sounds clunky and freewheel still drags quite a bit.

Pumped up tyres on Ladybird. They were down to 40psi. Should be 55psi so that would have slowed Fiona a little.

The insightful staff of the workshop at Hadron Cycles swapped the nice road tyres from my ancient blue racer with the mediocre road tyres on my Specialized Secteur.

This means the nice Continental Gator Hardshell’s are now on Specialized Secteur, ready for my Winter trip back to Hampshire to see the family.

It’s one of those fiddly, palm-indenting and finger-scraping jobs which I’d much rather pay £20 than try doing myself. Especially with the risk of getting an instant puncture if the inner tubes get pinched.

If all 3D movies were produced as exquisitely as the opening titles of this movie…I would want everything to be 3D. Truely spectacular – if you go to see it, watch for the hummingbird during these titles!

This movie is an adventure with a huge range of pace but very few locations. It has a fantasy look and magical feel.

Fiona cares about animals, as do I. There are a few scenes dealing with survival that are quite raw but not gory or gratuitous. This isn’t Prometheus!

We talked about the film with friends on our skiing trip and found some new interpretations.

Tonight, the London Scalextric Club resembles Days of Thunder as the NASCAR series rolls into town.

My favourite class of all as everyone races the club’s set of 6 cars. Each car has a dedicated lane. It’s a level playing field so a true test of driver ability.

Drove very deliberately clean for this race. Having the easiest lane at the start of the evening often means a good result as the other drivers push beyond their limits.

Fell smack, bang, wallop into the trap I did so well to avoid in the 1st race! So many crashes from trying too hard. Poor discipline on my part.

We sometimes move fast between races. It doesn’t leave much time to scamper over to the monitor and tap out my race details into my phone.

We had the mid-way break and the committee worked out the running order and lane choices for the club’s mini tournament format, which they call ‘Finals’.

It’s a knockout competition where only 1st and 2nd go through to the next round.

I didn’t record my performance data as the format moves between races very quickly.

Please that I reached the 2nd final but missed out on the grand final. Steve, the club chairman, took a deserved win and the trophy which goes with it.

The earbuds that came with my Nokia Lumia 800 have proven pretty durable. Until today, one of the the silver caps which sit in front of the speaker came off.

Transported it home in a freezer bag in my lunchbox. Put 3 tiny, tiny dots of superglue aligned with the support beams inside earphone. Placed it all together, held briefly, then left to dry.

Couple of hours later, remembered I had done this and checked in on it. Good to go!

Never saw this before. If you enjoyed the vintage style of The Artist then this is an entire genre ready-made for you.

A long but subtle section of Sci-Fi themes appears quite unexpectedly in the story. No special effects but a welcome portion of brain food for any nerds who accidentally stumble upon this classic movie.

Specialized Secteur feels supremely comfortable compared to the beaten up my 1970’s non-branded steel racer. But is it actually faster?

No tools are needed to fit the Cateye Strada wireless cycle computer onto a bicycle. So I can transfer it between them within an hour.

Why so long? Because you need a tiny flat-headed screwdriver to release the zip-ties. (One out of a cracker would do but I used a cheap electronics one.)

Here are the results so far.

Cycling Superhighway 7 (CS7) along A3 has lots of drains, service covers and potholes!

After crossing Thames heading North I found a diabolically bumpy road. Even with the comfortable ride of my Secteur.

London Scalextric Club hosts the 3rd round for Sportscars. This includes Le Mans prototypes, amongst other things.

It’s the fastest closed-wheel class they race. There are no magnets but some cars use the motor magnets to increase tractions. The cars generally race quite straight but some of them move around a little more. A quick, precise powerslide can flick these cars around nicely when you’re on the inside of the tightest turns.

Only got one race of information from the evening. We used 5 lanes and raced 3 minutes per lane.

Nice early appointment on a bright, crisp Monday morning. Rode my Specialized Secteur gently to the Donor Centre. Made sure I didn’t get lost this time and arrived with 15 minutes to spare!

Narrowly passed the blood iron level test this time. They had to use the more accurate machine and measured it at 135 – exactly on the threshold. Phew!

Hung around for a while, then rode back gently on my delightful Specialized Secteur. That bicycle feels better and better with each journey. Hardly any force, using the big chainring, cruising 15mph.

Such smooth ride quality as well, it’s like the BMW of bicycles. Certainly compared to my ancient steel Marlborough Mirage! 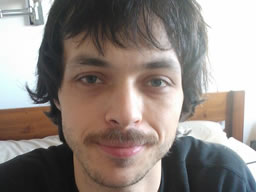 It’s over! Ended up with a passable ’tache and £35 of donations.

This sometimes happened to me at Redhouse Lane, as I had 3 machines on my desk for testing.