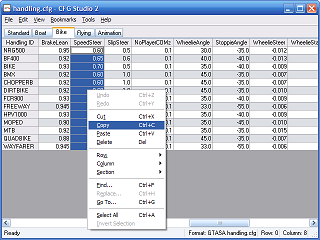 RonMar Diel wrote in about applying real-world research into sports car performance to the 3D games in the GTA series. It was a particularly well-written question, so I’ll quote it here and then answer it in detail.

GTA San Andreas is based on the earlier editions. A lot of techniques are the same. You will need slightly different values since the physics were enhanced in each game. But my step-by-step approach can achieve more realistic performance in any of them.

Start to understand handling.cfg by reading my short description of each setting. If you’re working in a different edition, try my complete list of tutorials.

Acceleration in San Andreas allows much more control than the earlier games.

For braking, I choose the highest value which only just avoids ‘locking’ any wheel when braking in a straight line on flat, dry tarmac. If your weight, grip, suspension and Centre of Mass settings are sensible then this usually feels about right, although I never measured it.

Sadly I never found a way to change the handbrake. It has far to much stopping effect, so handbrake turns and stunts are far too difficult!

Getting some R* cars to behave like their nearest real-world counterparts took a long time. San Andreas allows particularly realistic acceleration a top speed by using a high EngineIntertia setting, the TopSpeed flag and a lower Drag value.

I did this for every vehicle in GTA3 and again for all the wheeled vehicles in GTA Vice City.

I saw a topic on GTA Forums where someone was trying this in GTA4, made several releases and neat videos. Unfortunately the forum is incredibly slow at the moment so I wasn’t able to find it. I recommend going there are talking to other modders, if you aren’t already.

I made CFG Studio 2 so you can work on the file like it’s a spreadsheet. It also edits carcols.dat and nearly every text-based format in GTA3, Vice City and San Andreas.

It also includes a Suspension Helper, since suspension works very strangely. (Widening the range of the suspension makes it softer and vice versa. Even if SpringRate and DamperStrength are not changed!)

A couple of settings can be the real, metric values.

You’ll find some cars behave totally unlike others, even if you give them identical handling.cfg data. This is due to the 3D model (.DFF file, I think) have it’s central point (origin) shifted forward or backward. For example, the car which looks like a Mitsubishi GTO has bizarre handling when it slides due to the Y-axis being very far forwards.

Also, the proportions of standard R* vehicles are often utterly stupid, presumably so car makers can’t sue for the cars being similar to real vehicle shapes. The one which looks like an F40 or F50, for example, has an extremely long nose, extremely wide track and relatively tiny wheels.

This means the wheels of the vehicle are in totally the wrong place, so the vehicle turns, leans and pitches in unexpected ways. It’s a fundamental physical error but you can work around it (in limited ways) as your handling.cfg skills grow.