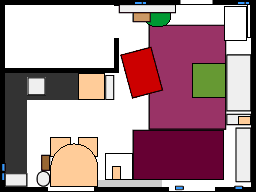 Dad drove the pickup truck down from Fleet, arriving at mine near 9am. We managed to pack everything in one go, moved it to Fiona’s and he took the rest back to Fleet. All went very smoothly! Below is the big planning list I made and alongside this entry is the furniture plan, which we did in Fireworks.

The previous day I had packed all my stuff into suitcases, boxes and a big hessian bag. Taped the drawers shut. All the kitchen stuff from Zoe was taped into neat stacks and placed in the big green box it had come in. Most of it was already like that as I’d only used a few things.

PC monitor is seriously heavy. Dad carried it up the flights of stairs to Fiona’s flat and was wheezing a lot after putting it down! Not sure I’d have managed it; certainly would have needed a rest or two.

The bag of clothes was quite bulky as it also had a duvet in it.

We’ve since swapped the PC Desk and PC Tower around for these reasons:

An unexpected benefit to this arrangement is that one person, while lounging on the futon, can put their feet up on the computer chair.

Wireless peripherals are not responsive enough for GTA2 multiplayer, in my experience. Keyboards seem to be especially limited with pressing several keys at once, which is often needed in action games, too.

Items from Fleet to London

Ben’s flat []:
A space out the front or along a bit in single-yellow loading area.
Fiona’s flat []:
Round the corner in a residential dead end?
Down an opposite residential road?
Nearer is much better!

Items from Ben to Fiona

Items from London to Fleet

Thinking about buying a 24″ panel monitor running that resulution. 2nd-hand prices are still pretty steep but I saw a great one go for £170.

Looks like my graphics card will just about support that resolution over it’s solitary VGA connection. It currently drives a bulky 18″ 1600×1200 CRT screen. Replacing it with a flat panel would save a lot of space.

Ultimate goal would be to run both screens at once, with the 24″ one in portrait mode. But I’d need a better graphics card for that. Getting one which can run two ~HD outputs and still support ancient games like GTA2 might be a tall order!

Still, it is right to treat oneself from time to time. Especially when things are good.

It’s only just sunk in. A few days ago I watched the original TRON and today I watched TRON: Legacy. Perhaps the hype meant fans broadly got what they were expecting. Without the hype, just now, it was a dazzling movie. Something I had forgotten is that it’s a moving story which reveals the emotional entanglement between users and the programs they live with.

There’s always something wrong with it. Always something difficult. Ever-more hoops and obstacles to try and log in. Which often doesn’t work anyway. There are no charts, graphs or other useful ways to view my finances.

Tonight, my Internet Banking User ID doesn’t work. That’s OK though, there’s a link to retrieve it. Except I have to provide my Sort Code and Account Number. I don’t know what those are.

Why would I carry long sequences of numbers in my head? I have Internet Banking to do that for me. Oh, that’s right, it doesn’t work.

Eventually found an old e-mail which had those details in it. Entered them into the system, hurriedly. Must have gotten a digit somewhere incorrect so had to start again. Got it right on the 3rd attempt.

This now gave me the Internet Banking User ID which was in a different format than I expected. Silly me, the format had changed a couple of months ago.

Still, if that that’s difficult for me to enter my own account then one would hope that means there’s no chance for anyone else. These usability roadblocks had better be making me more secure.

Then again, it makes me check my finances far less frequently and hurry through the one or two tasks I have to do. Spotting subtle irregularities or looking carefully over the history is less likely.

After a week or two with the newest version I am finally enjoying Firefox again. It seems the GUI is more responsive and has a tad more native feel, although still doesn’t quite fit in with Windows XP Royale.

Much of my satisfaction is thanks to the Vertical Tabs extension used in tandem with Sidebar Unifier. This seamless combination lets me optimise screen space even with lots of tabs and bookmarks open at the same time.

Going from 3 to 3.6 to 6 reminds me a little of going from version 1 to 1.5 to 2. Looks like the rate of change is making things tough for extension developers but I’ve got all the essentials I need. (Even though a couple were labelled ‘experimental’.)

An obvious oversight is no more downloads indicator because the Status Bar is gone. Turning that on again is easy…oh, wait, it isn’t in View or View > Toolbars either! So yeah, there is no way to view download progress!

Opening the Downloads Manager is possible from Ctrl+J but if you remember, Firefox “won’t have hacker-focus”.

Tools > Downloads is the new way to open the extra window which tells you what is happening due to you clicking something in the main window. (You would then have confirmed that click in one or two dialogue windows immediately afterwards.)

A distinctly clunky regression when the point of the World Wide Web is to share files, imho.

Oh, you can’t middle-click anything in the Add-ons Manager. That makes browsing and comparing difficult. A web browser should be good at browsing, imho. You can’t click (or even copy-and-paste) the URLs extension authors provide in their descriptions! This is bad.

It still hogs all the resources it can get its paws on. Firefox, you aren’t the only program I use. Stop bullying my system. And seriously, displaying a few screens of formatted text should never take hundreds of megabytes of memory.

A great track with many undulating corners, very long straight and some scary fast kinks. The finish was a fascinating cat-and-mouse fight across 3 classes. Several manufacturers were represented. The winning margin was under a second, making it the closest every finish for this series! A thrilling race in a diverse endurance championship with decent commentrary, regularly shown on Motors TV.

I watched this wile visiting Zoe, who was house-sitting our parents’ place in Fleet. We went to the Pizza Express on the high street and it was nice. Shared one of their thin crust pizzas and it was delicious.

We had a kick-around in The Views, a park I had only been to for Fireworks Night once or twice when very young. It was seriously exhausting due to the blazing sunshine. I drove us back to the house in Car-Car. (Dad and I had fetched it from the yard as he had some errands to run there.)

The next day we played a bit more football in Basingborne Park, which was much closer. Again it was super hot, a bit too much to play continuously. Still good fun, though.

We took a slightly different route back from my flight simulator session. While on the Tube we got chatting to a cyclist about street bicycles.

He recommended Bike Exchange to get a good 2nd-hand deal. Seem to be a lot of websites called that but none quite match. He did say it might not be online yet.

A few easy searches at my PC and I found an old one called a Marlboro Mirage. It’s under £50 on the Preloved website so this could be quite easy!

Yesterday I asked to view the bicycle listed above. Today, Fiona and I went to view it and I have now bought it!

The tyres need replacing and the gears are difficult to reach. But for £50 it’s a bargain.

Rode it back from Tottenham Hale railway station to the flat, near Finsbury Park Tube. Stopped at the top of a hill because it was such hard work! It’s been a number of months since I’ve ridden a bicycle and rarely go along main roads.

Borrowed Fiona’s iPhone to help navigate back and it was an easy route. Will need to raise the saddle quite a lot but it’s a nice big frame, so should go high enough.

Fiona had bought me a Groupon voucher for this and we finally booked it. Left the flat before 9am and took the Tube right across London. The simulator was awesome, with LCD cockpit instruments and all the switches a real modern airliner has. The instructor was a cool guy, doing all the fiddly stuff for me so I just steered.

You get to choose where you take off from and where you land. I chose London City Airport to take off, which was spectacular. There was just enough runway to get airborne!

For the landing I chose Hong Kong for the famously difficult approach over the city. We started 10 miles out from the new artificial island, did a ‘touch and go’ on that runway. Reminded me of landing an F-14 Tomcat on an aircraft carrier in the fantastic MS-DOS game Top Gun: Fire at Will. Must find out if that game will run properly on a Windows XP machine!

The instructor was brilliant, advising me of the route and setting the instruments manually to help guide me. It takes a sharp right-hand turn to line up but there were lights in the air to help show the route. I landed us successfully on the runway so felt very pleased!

That was the end of the session but I think I got a bit of extra time as I was being such a keen student. (And a bit of a teacher’s pet!) The instructor signed a certificate which I packed in my lunchbox to avoid creased. We got a voucher for 50% off another session in the next 3 months, too!

Today was the day! Fiona had loads of cards and presents, plus my parents sent a beautiful animated e-card. It ended with the following poem:

Best wishes for a lovely day
No time for work, just time for play
Have a very Happy Birthday
Love from Tom & Gay

Mum confessed to being the writer. Dad had already dobbed her in, thusly:

I cannot lie, it was not I,
’twas a mouse fair and Gay,
the wordsmith for a special day!

Fiona and I had a delicious, peaceful and sedate lunch at The Vine. For drinks, I had a large glass of wine which lasted the whole meal and dessert. Fiona had to help me finish it, in fact! We had the place pretty much to ourselves.

Got an 8:40am appointment at the West End Donor Centre. Strolled down to it, just a few minutes from this flat. The novelty of convenience such as that is still strong! All went very smoothly.

Was told to gently wriggle my fingers instead of clenching and unclenching my fist while donating. The process seems a bit different every time I go. Was still finished very quickly!

Enjoyed 3 cups of orange juice, a bag of crisps and a trio of ginger nut biscuits. All while watching some show about finding the rightful heirs to inheritances.

My first ever festival and it was amazing! We travelled out to it during the middle of Friday and came back to London on Sunday evening, camping whilst there. Saturday was fancy dress, the theme being gods and monsters. Fiona and I went as unnamed minor Roman gods, made possible by a last-minute life-saver of a friend let us borrow authentic togas.