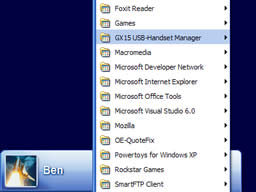 I realise the help documents think the Handset Manager has already been opened. Perhaps the installer tried to open the manager but that failed, so it opened the folder instead?

Anyway, I go to the Start menu and find the item it installed. Windows XP had helpfully highlit it. 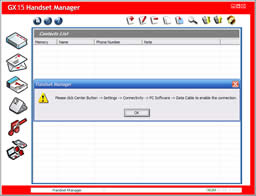 I’m greeted by the message box. I’m enough of a nerd to realise it’s talking a sequences of key presses and menu items about my phone. So I don’t start looking for a menu called Center Button. But this is far from obvious.

I select Data Cable as both the message box and common sense tell me.

Update for 6th June 2010: This stopped working today, for no apparent reason. Unplugged everything, turned off my phone, turned it back on again, then started again from the top of this page. It worked right away! Another case of the cliché “Turn it off, then turn it back on again!”

My phone displays a Data Transfer window. Nothing seems to be happening, so I click OK to the message box on top the the Manager. It says Trying to connect to the handset, then Downloading data, please wait. Then it says Signal: -95dbm. Whatever that means.

A new message box appears above the manager. With an exclamation mark! I click OK.

The Need for Speed

A rather nostalgic split progress indicator. Reminds me of the full-screen InstallShield installer which came with Need for Speed II Special Edition from the mid-1990’s.

Once finished, it gives me a message box saying it has finished. Why oh why oh…spells “yoyoyo”. I click OK. 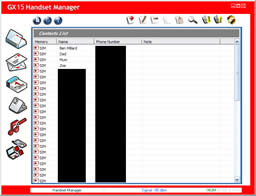 I can now see my phone’s stored details in the Manager window. (Censored as these are other people’s details.)

That stupid message box merely delayed me from seeing the successful result of what it was telling me about.

I scrub the whole UI with my mouse and find most of the icons have a hover state and a tooltip. It seems the ones down the side are the things you can manage:

(Looks like I was going to write something here but got bored.) 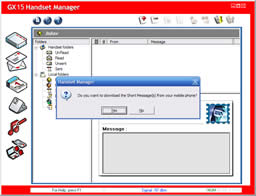 This was the reason I installed the software: archive my messages to free up storage on the phone. I click OK.

This takes quite a while, about 54 seconds. Both the progress bar and the animation progressed at an even pace, though.

But when it reached the end it froze for about 4 seconds, then returned me to the Manager.

Unlike the Contacts List area, I couldn’t see any messages. It was not immediately clear whether the download had been successful. I noticed the UnRead folder (which should surely say Unread) is selected (why?).

I select Read and can now see the messages. The statusbar tells me 63 message(s). Phew! (Are properly pluralising status messages really that hard to code? That’s a rhetorical question; they are trivial.)

The messages are not sorted in any logical order. I would expect a Read folder to use chronological order, most recent first.

Also, that horizontal scrollbar is annoying. I make it go away by reducing the Message column width by a couple of pixels.

I then notice there are 2 divider lines after the Message column instead of just 1. So I narrow it a bit more, get hold of the rightmost divider and drag it rightwards. This reveals a Time column! So there’s how you are able to sort chronologically.

Anyway. It’s worked. Yay, I guess. It is hardly a pleasant nor convenient experience, though. Sorting chronologically should not be reminiscent of playing a “mystery” game on the Crystal Maze TV show.

So much for A World without Borders 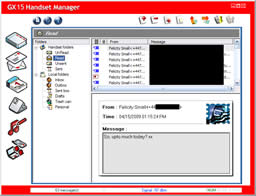 Look at all those massive gaps! Most are unnecessarily separating unnecessary borders from each other. Completely wasted space!

The window has no titlebar. It has something a bit like a status bar at the bottom but there’s no sizing grabber in the lower-right corner. Compare with Windows Explorer or Outlook Express.

But a subsequent eagle-eyes sweep of the UI made me notice those tiny white glyphs in the top-right of the window. They look a bit like Windows control box buttons. I click the middle one (depicting a square) and the window maximises. So it’s resizable!

The columns did not expand to fill the available space. I would expect autosizing, with all columns except Message expanding to fit their widest item. Any leftover space would be filled by the Message column. Anyway, I sized the columns manually and took the massive screenshot you see here.

Also, the message preview pane at the bottom doesn’t enforce a minimum height but does scale as though it uses an HTML layout table with percentage heights and CSS percentage padding. So if you maximise, shrink it down to a modest height at the bottom, then Restore Down, it disappears. All you get is a sliver of grey for the splitter resize handle.

Another annoying is that moving focus out of the Folders pane hides the selection. So I can’t see which folder I’m in by glancing over there. I have to look up to the big, grey header which presents the current folder name in some ghastly, unsmoothed, mechanically italicised font from the mid-1990’s. Outlook Express gets this right. 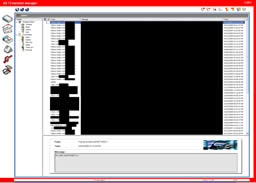 Another super-weak problem is there’s no context menu for the Message preview box. You can select text but you can’t right-click and select Copy!

Pressing Ctrl+C brings up this Copy to Folder window. This is just wrong. 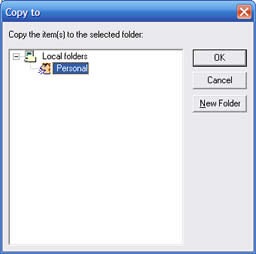 Now everything has been downloaded, I want to close. With no obvious Save button I figure it has saved everything to a default location. That would be convenient.

Alas, this was not the case and I get this exclamation box. I click Yes, obviously. 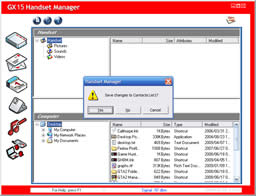 This pops up the common dialogue window for Save As. Interestingly, it will save as a Phone Book File (*.pbf). I didn’t realise there was such a format, nor that one was necessary. CSV ftw!

It starts in the My Documents folder which actually makes sense for this situation. But I prefer to keep everything together when it’s a 3rd-party application which I don’t plan on using frequently. So I use Windows Explorer to create a new folder at this path:

This time there’s a box I can paste this path into. This saves a lot of fiddly clicking! I click Save and a the main window dissappears! A little grey box says Closing application, please wait but only for a moment, then it’s gone. (Hence no screenshot.)

Could it really have saved the contacts list that fast, compared with how long it took to download them? Wait a minute, what will have happened to the messages I downloaded? It didn’t offer to save those!

A Hair’s Breadth from Disaster 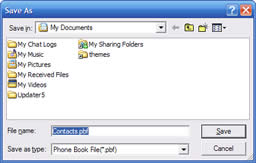 Fearing the worst, I re-open the application from the Start menu. It gives me the message box about Center Button again. But my phone is still on the Data Transfer screen and I never unplugged it.

I try just clicking OK since everything should still be fine. It gives me the message box saying it will […] download handset Phone Book to PC! What the hell?! I just did this and saved it when closing the Manager!

I click Cancel to see if it will load up what I had already downloaded and saved. It doesn’t. (Expletives deleted.) If I had trusted what the UI had told me and cleared me phone, I would have just lost everything.

I would have lost everything! 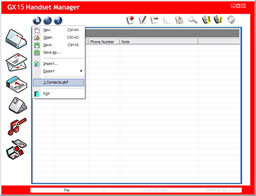 Anyway, I click it and select Open.... This pops up the common dialogue window for Open. And it starts at the folder I saved my contacts to, with the Contacts.pbf file there. Phew! But why in all that’s holy didn’t it load this up automatically when it started? It clearly knew where it was!

I select the file and click Open. My contacts are loaded. Phew.

I click the Messages icon. Manager shows me the message box asking if I want to “[…]download the Short Message(s) from your mobile phone?” Strangely, the messages I downloaded last time are visible behind it, so why is it asking this again? I already downloaded them and they are right there!

I click No. I immediately notice my impeccably chosen column widths have been lost and the message preview height, too. Not only does it fail to autosize the columns, it disregards the sizes you set so carefully! (Expletives deleted.)

I also notice the names of all the senders have gone! The numbers are there but not the names. (Expletives deleted.)

I restart the Manager, Open my contacts, then go to Messages. I can see the names are still absent. So I click Yes to the message box which offers to download my messages. Out of sheer desperation more than expecting it to actually solve the problem.

Once downloaded, all my messages dissappear. Noooo!! Then I notice it’s switched to the UnRead folder again. Why does it do that?! I put it back to Local folders > Inbox. The messages are there but no names!

Am I stressed at this point? You bet your arse I am! I feel like throwing the damned thing out the window!

Then I look back at some previous screenshots. I realise the name is only displayed when viewing Handset folders. OK, so this is consistent with how things were before. But the Manager knows whi my contacts are. Indeed, it knows everything my phone does. So why doesn’t it link up the numbers with the names?!

It is now 10pm and I have given up. Will make myself a hot chocolate and play some games. I was on top of the world earlier in the week. But this frustrating waste of time has ruined my day. 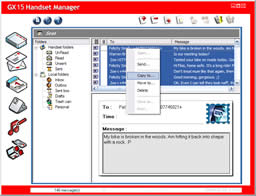 After closing the Manager, I notice the Help was still open. So I browsed around it a bit and noticed the Copy To… item in the context menu for a message. In a moment of inspiration, I had an idea.

I re-opened the Manager and downloaded the Messages from my phone. Went to Handset folders > Sent and selected the first item. Pressed Ctrl+A and to my delight, all were selected! I right-clicked to get the context menu and clicked Copy to… as shown in the screenshot.

This opens the Copy to Folder window. I chosed Local folders > Outbox as the destination. Clicked OK and the window went away almost instantly.

Selected Local folders > Outbox on the Manager and…success! It even has the names with the numbers. Wewt!

I now went to Local folders > Inbox deleted all the messages. It deleted them one by one, updating the preview each time. This took quite a while but it worked.

Went to Handset folders > Read, Ctrl+A, Copy to…. Could only select Personal as the destination, inexplicably. So that’s what I chose and I clicked OK. The UI lagged for several secons, then the window went away.

Went to Local folders > Personal and…success! Of course, column widths are completely wrong but at least the messages are now on my PC. Also, the sent I saved no longer have the time I sent them. It’s just blank, so I can’t sort them chronologically.

Disconnected the phone and closed the Manager. Since the received messages seem to have been saved properly, I cleared out the Text Messages > Inbox on my phone.

What an utterly stupid way of having to do things to get even half of the backup facilities I wanted.