Wow, what an experience! Basically, I’ve spent Saturday and Sunday winding down from the amazing TPAC 2008, which I’d attended during the week.

Now it’s Monday morning and I’m straight back to the grindstone! Cross-browser CSS fixes over breakfast…yay.

All the meetings were minuted. Those records will be tricking onto w3.org as they get reviewed, approved and tidied up.

My notepad took a hammering during the event. I’ve got 18 pages of personal notes and 43 pages from meetings! My notes only capture things which interested me. A couple of people asked to see what those things are and I’d like to document them publicly.

2 pages of notes came from a meeting between Hixie and I. These will improve my research for this year as I merge in his advice about what’s useful for the development of HTML5. Looks like the work will be giving more advice than I expected.

A few things I’ve decided not to blog:

All the notes will live in a ring binder for posterity, so the information isn’t lost.

Entries I wrote about TPAC 2008, in chronological order.

Everyone was out of the house and I’d finished eating lunch. Was thinking of turning the PC on and tidying up the Collections of Interesting Web Pages.

Then I noticed my empty suitcases sitting on the floor, empty and expectant. So I put on some music, turned it up loud and made a beeline for the airing cupboard.

Having figured out the number of days I’ll be at TPAC 2008 I started sorting out sensible amounts of clothing. After confirming various items, I ferried them to the suitcases where the musc was going.

Unintentionally and quite uncharacteristically, I started humming along and singing the bits I knew. (Quite how it sounded is probably best left unrecorded.) The ritual of packing had triggered an old feeling: excitement.

Back in the day, I’d have music going the whole time I was at the PC. My feet would be tapping and I might even sway a bit as I hummed and mumbled along. This would have been while modding GTA or joking and working with my various fellow modders on GTA Forums.

It also brought back memories of preparing for TPAC 2007. I felt like a fish out of water for most of that event. I’d only attended one conference before that.

This time I’m more sure of what I’m doing. The excitement I felt today is a reassuring affirmation of that. 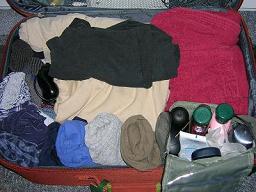 The cream jumper is wrapped around the Playstation 2 and a couple of games.

Meetings I plan to spend some or lots of time in during the day: