About 3.5 years ago, I documented a nasty conversation with Demarest from GTA Forums. 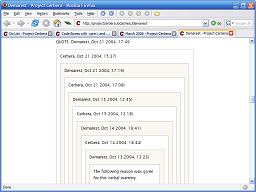 A faithful reproduction of a terrible design! I’ve now flattened it, like a forum topic:

All in all, a successful piece of tinkering.