Fliss and her mum (Sue) were going to Craig’s wedding this weekend. Craig is a son of Sue and is about 34 years old.

It was very quiet in the house while they were away. Reminded me of when I housesit for mum and dad.

Unpacked my stuff when I got back, then pumped up my bicycle’s tyres and went for a 30 minute cycle ride. Then I ate dinner and blogged this.

Went to a place in Church Crookham for my haircut this time. You can actually make appointments so there was no waiting around.

It was a big room with lot of space in the middle. The one in Aldershot was pretty cluttered.

Had it cut back to earlobe level, about the same length as the last time. But this time I let them put “layers” in it, which basically means the top gets cut back further to give it a roughly even depth of hair all over.

After nearly two months of development, today I release a new revision to my MDI text editor, TextStudio.

It has never reached a 0.1 release because as soon as it becomes stable I add a neat new feature. I test and bugfix it whilst using it for my everday tinkering with websites and whatnot. But once it gets stable, guess what? Yep, I start add something else!

Indeed, this release has truckloads of changes from the previous version. But once this Find/Replace panel is stable and I put together a rock-solid keyboard handler, a 0.1 release is on the cards.

Between 09:00 and 10:00 today I was having my lower left wisdom tooth removed. It was coming through crooked and food was getting lodged between it and the molar.

The 4 jabs of local anesthetic took quite a while to fully numb my jaw. But it’s still numb now, at 11:05, much like when I last had a filling done by my dentist. I felt no pain during the procedure but it needing a lot of heavy drilling and grappling with metal implements.

All the staff for this procedure were female; 4 of them in total. They were quite chatty and we shared a few jokes. But when it came to the crunch they were all business. And I mean “crunch” literally: the roots were very curved so it had to be split apart.

The news and whatnot can say the NHS is going to hell till the cows come home. My experience of hospitals and dentists has always been friendly staff with good equipment in clean rooms.

At some unknown point, the new error handling for this website will be made available and written about. You can test it by choosing bogus URIs like these:

The breadcrumb displays all the levels just in case the directories are correct. I could adjust this so it only displays the directories which are known to be correct but that requires more maintenance.

Fliss had hurt her ankle earlier in the week and it had visibly swollen up. So we stayed in for the weekend and had a laugh playing computer games.

Many bug fixes and robustness improvements plus an improved Edit > Find window: 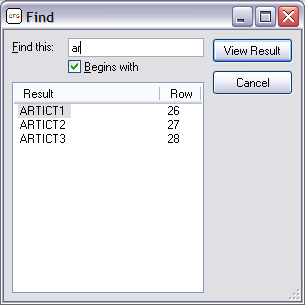 There were some bugs in my redirection code so that all requests for old versions get sent to the newest version. Those are squashed now. I also simplified that section so the download links are on the main page rather than a separate page.

Fliss has applied to join the Army as a medic! She’ll have to run a mile and a half in 11 minutes or under to be accepted, so we did a bit of informal training together.

When did my life get so full of responsibilities and obligations? My fingers only leave the keyboard to answer the phone or use a mouse these days!

A couple of days ago I noticed the inside of my throat was starting to gain yellow polkadots. Since then it’s gotten quite sore and goey, slightly making me want to throw up at times.

Blackcurrent throat sweets are helping a lot. Not by any medical means, afaict: their lovely taste distracts me from the symptoms.

The family and I went to the Hatchgate for a meal. I had the sirloin steak which was gorgeous last time I had it and was just as good this time.